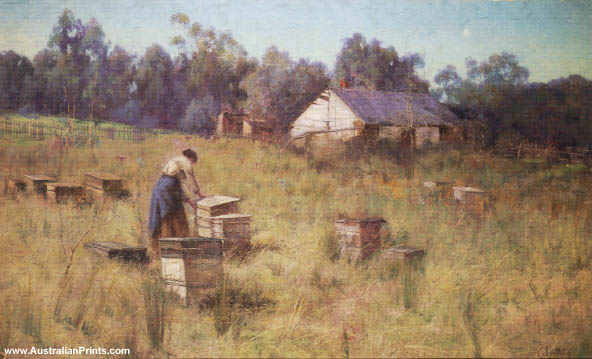 Clara Southern (3 October 1861 – 15 December 1940) was an Australian artist associated with the Heidelberg School, also known as Australian Impressionism. She was active between the years 1883 and her death in 1940. Physically, Southern was tall with reddish fair hair, and was nicknamed ‘Panther’ because of her lithe beauty.

A landscape painter in oils, Clara Southern began her art career studying under another woman artist, Madam Moucehette, and later under Walter Withers.

Her love and knowledge of the countryside is clearly seen in her landscapes which are notable for their lyricism and charm.

Many are of the farm buildings painted near Warrandyte where her work and presence attracted a number of other artists to instigate an artists’ colony, among them Penleigh Boyd, Louis McCubbin, Charles Wheeler.

Along with Jane Sutherland, she was regarded as one of the foremost women artist of the era and continued to live and paint at Warrandyte until her death at age 79.

This article uses material from the Wikipedia article Clara Southern, which is released under the Creative Commons Attribution-Share-Alike License 3.0.