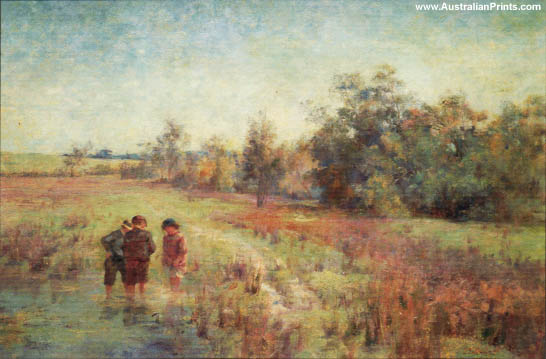 Jane Sutherland (26 December 1853 – 25 July 1928) was an Australian landscape painter who was part of the pioneering plein-air movement in Australia, and a member of the Heidelberg School. Her advocacy to advance the professional standing of female artists during the late nineteenth century was also a notable achievement.

Daughter of George Sutherland (1829-1885), Jane Sutherland was a painter and engraver from a family of diverse artistic talents.

She was born in Scotland and arrived in Australia in 1864.

When she was 26 she was accepted by the prestigious National Gallery School which she attended until 1885. It was here that she struck up friendships with McCubbin and Roberts.

In 1884 she was elected a member of the almost exclusively male Buonarotte Society, a group of young radical artists. It was about this time that she set up and shared a studio with fellow student Clara Southern in the Grosvenor Chambers where Roberts kept a studio.

Sutherland was one of a group of voting painters who escaped the city and the classical influence of the art school by sketching in Melbourne’s outer suburbs, Templestowe and Eaglemont. This group became known as the Heidelberg School.

This article uses material from the Wikipedia article Jane Sutherland, which is released under the Creative Commons Attribution-Share-Alike License 3.0.